Peaty in the Desert: The story behind this image 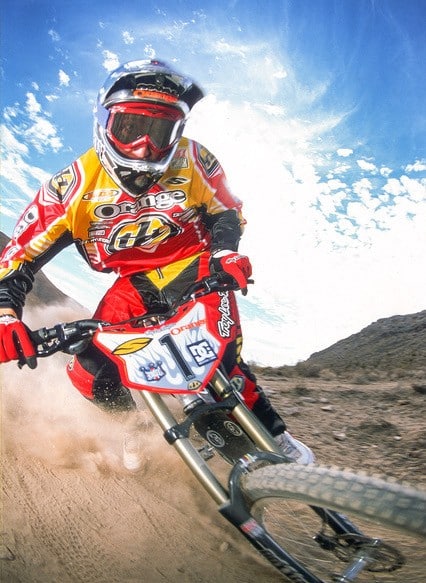 Wow. What a powerful image. Steve Peat sideways in the desert, heading straight for the camera of Mike Rose, our friend, sometime-director and something of a legend in the world of ceramics.

Mike took this amazing photo way back in 2002 before cameras were even part of your phone. Before phones were even something everyone carried in their pockets. Crazy! Just think of that — how did anyone speak to each other?

Anyway, Rosedog put pen to paper and then sent the script by carrier pigeon to be typed up into a new-technology document that could be messaged via electronic mail and then displayed on this very website. Phew! Things aren’t as simple as they used to be, eh?

Below you’ll find the transcription of Mikey’s tale behind the iconic image of Steve Peat. Like the photo? Want it on your wall? Stay tuned.

In 2002, Steve Peat finally won the World Cup downhill series (the celebrations after the final round in Les Gets were legendary). Fast-forward four weeks and I found myself at the Interbike trade show in Las Vegas, and who should show up? Steve Peat.

I needed a cover shot for Dirt Mag, something a bit different to just a standard race photo. Peaty and I hatched a plan and ended up driving out to a random spot in the desert to some big drifty sweeping corner at the side of the road. I shot a couple of rolls of film, Peaty happy to keep going to get the shot.

Of course, there was no checking on whether you’d got the shot back then, you either had it or you didn’t. I shot on a 200mm lens for a while and then switched to the fisheye with a bit of flash. We ended up using the long shot on the cover of Dirt #36, but I kind of think I like this ‘in your face’ version more now.

After the shoot we carried on driving out to Utah for the Red Bull Rampage — two big blokes crammed into a tiny sports car with a bike in the back! This was the second year of Rampage and Steve managed to qualify for the main event, but he decided to miss the finals and instead head back to Vegas to watch the Supercross. Ha. Forever the pro! — Mike Rose