Black Snake Rodeo: The Story Behind that Photo

And Sam Hill is one of the greatest mountain bikers on the planet, this photo encapsulates an era of Sam Hill domination, Iron Horse, Troy Lee Designs, Val di Sole, 2008, focussed eyes and just looking damn cool. Sebastian talks us through that weekend, and why this is one of his favourite shots.

BUY THIS PHOTO FROM OUR PRINT SHOP

As a race photographer most of my favourite photos come down to a rider’s first win, and even more so if it’s at World Champs or in a World Cup finals run. They are the ones that capture a special moment in mountain bike history.

Whatever race I shoot, it’s not just about getting a good picture, it’s about telling the story, capturing the atmosphere, showing the track, the crowd, the focus in riders’ eyes, and the emotions after they cross the finish line in their race run.

That’s what I want to capture each weekend, as well as occasionally the very rare, special, and unforgettable moments. The challenging part is to anticipate where and when those shots are going to happen; downhill racing is unpredictable and fast paced. The most important moment of a race can happen in a split second. It can be frustrating if you take a risk and get it wrong but, on the flipside, it is immensely rewarding if you manage to pull it off and find yourself in the right place at the right time.

The World Champs in Val di Sole, 2008, was host to one of the most memorable moments in downhill history.

In his finals race run, Sam Hill was leading by over six seconds. But then, on the second to last corner, disaster struck: he lost traction, slid out, hit the dirt and watched the gold medal slip out of reach. This was the story of the event — all the magazines wanted that photo of Hill in that corner. I didn’t get the shot. I was on that corner but had left just one or two riders before, deciding to go further down for the last couple of runs.

Instead, I captured a disappointed and bruised Sam Hill at the finish, then minutes later Gee Atherton winning and celebrating his first ever World Championship title. Of course, I was disappointed I didn´t stay longer in that corner and had missed the all-important shot. When I got back home after the race and watched the replay of Sam’s run on Freecaster, I couldn´t believe my eyes when I saw the speed he was going through those steep technical sections. It was completely mental.

Surprisingly, in the end my favourite shot I took from that World Champs week wasn’t even from finals. It was a shot of Sam on the second day of practice and I can’t tell you why I like it so much, but I liked it from the moment it flashed up on the screen of my camera. It’s not a creative angle or an arty composition; it doesn’t really show the gnarliness of that amazing Val di Sole track either.

Nonetheless, it’s one of my all-time favourite race shots and if I had to pick one Sam Hill photo I’ve taken over the years it would be this one. Maybe because it feels like a timeless shot of Sam, representing his iconic years on the Iron Horse, flying down one of the best downhill tracks ever.

But it’s probably because it just always reminds me of that amazing race weekend in Italy and how lucky we are as race photographers to be able to witness so many incredible moments, experience the atmosphere and strive to capture the history of our sport. Even if we don’t always get THE shot. 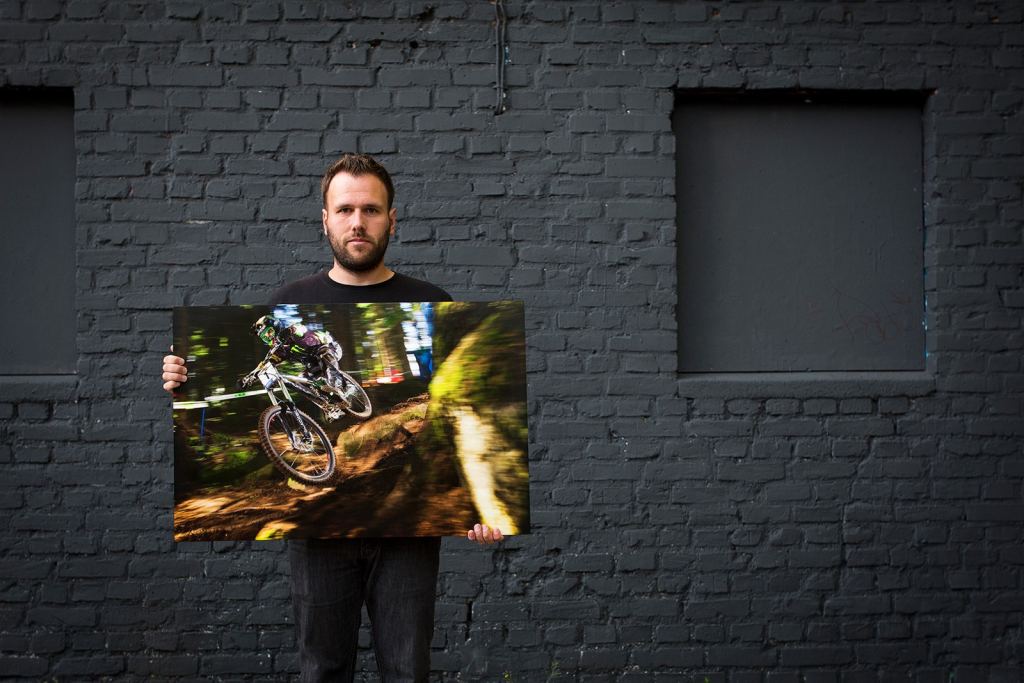 We’ve recently launched our new Print Shop, where you can find a selection of Sebastian’s images available to purchase.