Deathgrip Movie Book: The Story Behind It

When we made Deathgrip Movie Book — a book about a film — in 2017. It was a project commissioned, loosely, by the film’s creators, Clay Porter and Brendan Fairclough. And what an honour! Deathgrip Movie was and is one of the most mind-blowing mountain bike films ever made. We were truly honoured to get involved, especially as we’d only recently launched Misspent Summers with our first downhill yearbook. 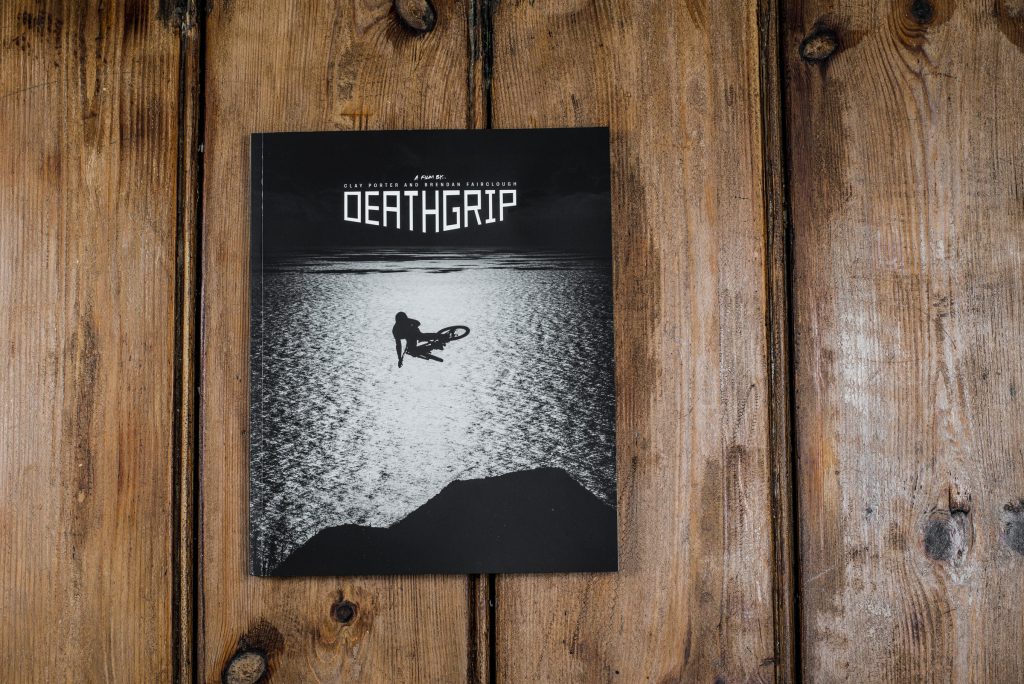 Jon Gregory was drafted in for the design of Deathgrip Movie Book and a host of talented photographers submitted images from the making of the film. The process was long — it always is when making one of these things — but thoroughly enjoyable. From dreaming up the contents of the book to planning it out and bringing it in (via a number of contributors who we owe many thanks), booking ain’t easy.

The book’s features include little ‘Views’ interviews with the riders involved in the film (Josh Bryceland’s and Olly Wilkins’ ones are highly entertaining), in-depth essays about the medium of film making and media in mountain biking, photo stories from the filming of each section (including some amazing black and white film photos by Brandon Semenuk), behind-the-scenes of the track builds, and much more. (We also transcribed an entire podcast that never saw the light of day — complete with what should have been outtakes…)

For the next step, the design, we went down to Jon’s little cottage in the woods in Cornwall, UK, for a week or two sometime late winter and spent every hour of every day working on the book: its styling, flow, image selections and adding in some fun bits. We had a good laugh making it, even if we did lose many hours of sleep. (Having said that, we did manage to sneak out onto Jon’s secret home trails for a few laps sliding around in the mud.)

When the design was all wrapped up, the next stage was of course print, selling it, and distribution. These final steps are usually some of the most stressful. Just when it feels like things are wrapped up, you remember the hardest work starts here. We went to our usual print partner, Cambrian Printers, in West Wales; that part was a no-brainer. Summoning the funds to send a bulky project like this to print is never easy, but we eventually scraped together what was needed and the print files were sent in after the usual proofing process (this can be excruciating, but at the same time it’s always nice to go back over everything you’ve worked on in minute detail). The printer sent the files back for the ‘soft-proofing’, which is going back over the files as they are set up by the printer and rectifying any errors they flag up.

Finally, the book was sent to print and 10-or-so days later it landed at our warehouse. The rest was another lengthy process of creating a sales platform (we didn’t have this website at the time), promoting the book, customer support, etc. and so on.

The best bit comes right at the end with these projects — that is, when people who’ve bought it receive the product and send you nice messages 🙂 Thank you everyone who already owns one and enjoys it (you can get one via the link below if you’d like to see it).

All in all, the making of Deathgrip Movie Book was a pleasure, and the final product is something we are immensely proud of. We look forward to doing some more stuff like this soon.