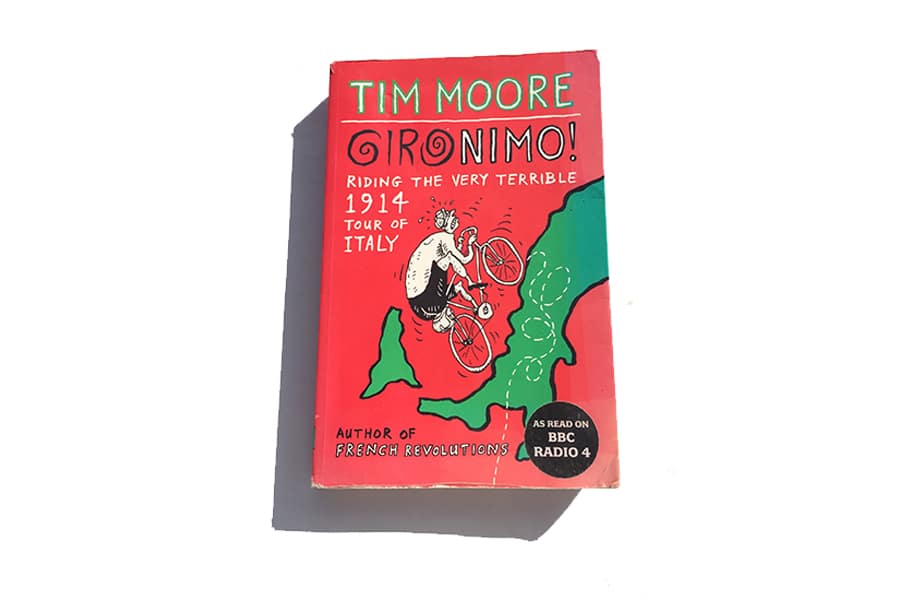 I first read Tim Moore’s laugh-a-minute tour of Italy, Gironimo, several years ago. Now I find myself accidentally rereading it. I had hoped to glance through and write a review along the lines of, ‘Excellent. Funny. Inspired.’ or something similarly lazy, but I find myself sucked in to its pages while suffering a multiple-hernia-inducing laughing fit. This book is so funny it’s dangerous.

Literally all I have to do is look at it and I start chuckling again. Since my first reading, I tried to leave the book long enough so as not to remember the gags (there are many), but the problem is that every joke is so perfectly conjured and surprisingly sprung on its already breathless reader (Gironimo isn’t for asthma sufferers), that I recall all of it — it’s hard to forget such exceptional work.

Of course, a book isn’t made good only by its jokes, no matter how funny, and Gironimo tells a substantial story, recounting the history of a great event and conveying the culture of a lively country very well indeed. Moore has a mission to ride the route of the famously arduous 1914 Giro d’Italia, an event better described as masochism than racing. After starting at midnight in Milan, the 1914 Giro relentlessly wore its riders into the ground over eight long stages and a total distance of 3,192km (it included stages over 400km in length that took literally entire days to complete). The 1914 Giro was so awful that only eight riders finished.

Regardless, to make things as difficult as possible for himself Moore ignores advances in bicycle and equipment technology and restores a century-old racer while cladding himself in the hand-knitted wares of the largely amateur or self-supported riders of the early period of Grand Tour racing. (He doesn’t sling a spare tyre over his shoulder or fuel up on raw egg whites, but we’ll let him off on those ones.)

Moore’s writing is so brilliantly descriptive and hilariously self-analytic that the purchase and restoral of his bike and kit, a process that could have been reduced to, say, eight drab words, spans the length of the book’s first four chapters. But this prelude to his ride could have been twice as long and I wouldn’t have bored of it; Moore’s writing just leaves you wanting more.

I won’t go into any detail about the ups and downs of the protagonist’s ride on the edge of oblivion, but I will quote a passage, chosen at random in order to present the unrelenting comedic rhythm of Moore’s narrative:

‘Like most Britons, I do not ascribe sentient qualities to my fellow road users. Other drivers, all of them, are to me automatons incapable of independent, reactive response to any unfolding situation. As such I assume that if I pull out directly in front of a vehicle, it will continue along its path in a robotically mechanical fashion, thereby running me over and causing me to die. Roman driving, though, is an interactive multiplayer game for actual living people. When a Roman driver pulls straight out of a side-road, he does so on the understanding that as an adaptive and free-spirited human individual, you will take spontaneous and ideally stylish evasive action. “I know,” they say, “it’s crazy, but it works!” Except when it doesn’t, which the bodywork of every single car in Rome suggests is almost all the time.’

The word ‘stylish’ has me in stitches every time I read it back.

A review quoted on the rear cover of my copy of Gironimo describes Moore as ‘Bill Bryson on two wheels’, which I would say is accurate. The book is exceedingly well researched, insightful and side-splitting, like any of Bryson’s. I can’t imagine there’s a person in the world who hasn’t enjoyed a book by Bill, and I don’t think anybody who pedals would fail to appreciate Moore’s writing.

If you haven’t read it (or even if you have), get yourself a copy of Gironimo.