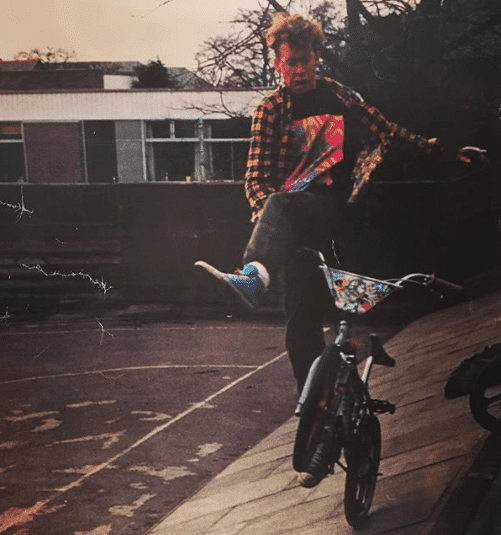 Aka the Cow, Mike Rose is a man of many talents. Longterm Dirt Magazine editor, potter, fly fisherman and photographer.

In the late 90s and early 2000s a fresh faced, red haired, young photographer was learning his trade. Immersed in the riding scene, Mike Rose hitchhiked his way to the big downhill races out in Europe and followed the scene as it moved across the continent and grew in popularity. During his travels, Rose captured some of the most exciting and iconic action images of the period, but his photography also showed a grittier, up-close-and-personal side of the sport.

Mike become more and more involved in Dirt, quickly becoming the backbone of the magazine. He began to step away from his own camera, taking the role as magazine editor and shaping a generation of mountain bikers. Rumour has it he is thinking of picking up the camera again sometime soon.

Peaty, World Cup Champ
From £30
In 2002, Steve Peat finally won the World Cup Downhill series. Fast forward four weeks and Mike Rose and Peat were in Las Vagas searching for a Dirt Magazine cover.
View Print
Enter the Dragon
From £30
The Welsh Dragon downhill race series really seized the moment, setting the bar pretty high, showing that there was real terrain and big mountains on which to host races in UK.
View Print
Bar to Bar, Elbow to Elbow
From £30
Back in 2003 4X racing was big news. It was fresh and new, and with its elbow-to-elbow dogfights it inspired flashbacks to the early days of BMX racing.
View Print